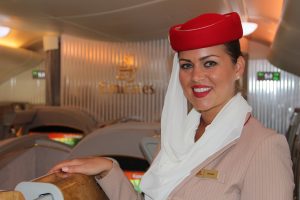 Emirates is celebrating 10 years in Canada.

Since ITS inaugural flight in October 2007, Emirates has carried more than 1.2 million passengers through its Toronto-Dubai route.

In Canada, Emirates’ established codeshare partnerships with WestJet and Alaska Airlines enable it to connect travellers from across its global network to more Canadian cities, and vice versa. Hitting the 10-year milestone in Canada shows Emirates’ continued commitment to its operations in the country.

“We’re proud to be celebrating 10 years of operations in Canada,” says Hubert Frach, divisional senior vice-president, Commercial Operations West at Emirates. “We started with a Boeing 777 aircraft flying three times a week. By June 2009, we had started operating with the Airbus A380 and increased our passenger capacity by 40% across Canada, which illustrates the strong demand from customers and the market.”

Emirates’ three flights per week between Toronto and Dubai is the maximum permitted frequency in the Air Transport Agreement negotiated between Canada and the United Arab Emirates in 1999. To date, Emirates’ entitlement and frequency of service remains unchanged, while trade between the two countries has increased significantly. Since 2009 and the upgrade to the A380, passenger occupancy on Emirates’ Toronto service has been consistently full, averaging 90%, with demand outstripping supply.

The majority of Canadian passengers are travelling to Dubai, the Middle East and the South Asia subcontinent, with leisure traffic to the Maldives and Mauritius.

Emirates is the world’s largest A380 operator with 98 in its fleet. Over 80 million passengers have flown on the double-decked aircraft since 2008. The three-class A380 on the Toronto route offers a total of 515 seats, with 14 private suites in First Class, 76 lie flat seats in Business Class and 425 seats in spacious Economy Class cabin. The Emirates A380 is renowned for its First Class Private Suites and Shower Spas, as well as Onboard lounge for First and Business Class passengers to mingle whilst enjoying canapés and beverages prepared by the onboard bartender. Passengers in all classes can enjoy WiFi.

Emirates currently serves Canada with services to Dubai, and onwards to 157 destinations in 84 countries, from Toronto three times a week.