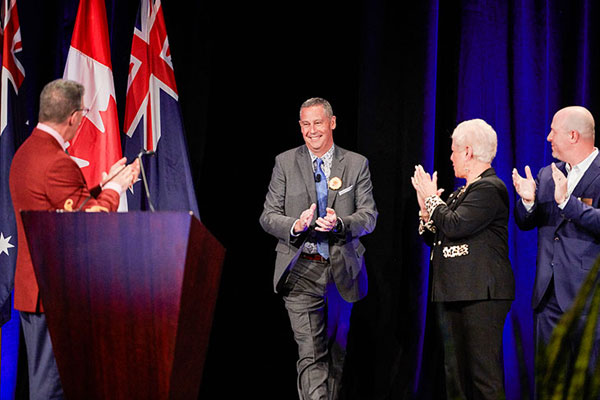 An overall conference theme of “Travel With Purpose” directed the opening keynote comments by Ensemble CEO David Harris, who said that “we’re all aware that climate and sustainability are fast becoming the biggest issues across the globe. With people making more than seven billion trips annually, sustainability is increasingly impacting our industry.”

Harris confirmed that travelling with purpose is an approach to travel that is being prioritized by the group. “While we can’t solve every problem, our business impacts environmental and social sustainability … and we have a responsibility to be mindful of that.”

About 900 conference attendees, including Ensemble member travel advisors and product suppliers, came to the event. Ensemble Group retailers from Canada, Australia, New Zealand and the United States gathered at the Hyatt Regency Seattle for the four-day event, during which member agents engaged in numerous training sessions.

During the conference, the CEO encouraged delegates to participate in tourism measures to mitigate climate change and take a leadership role in that journey. “If not, we will face the consequences of failure,” said Harris in an interview with Canadian Travel Press.

He said the climate change mission by the tourism industry will require support at all levels of the executive leadership chain, especially by tourism product suppliers. And it will essentially need to portray certain practices as socially unacceptable, in the same way that smoking or drinking/driving has become.

“I’m pleased at the degree to which suppliers have got on board and committed to solving climate change with many different measures,” said Harris. He paid tribute to those tourism sustainability leaders, including The Travel Corporation and its TreadRight Foundation.