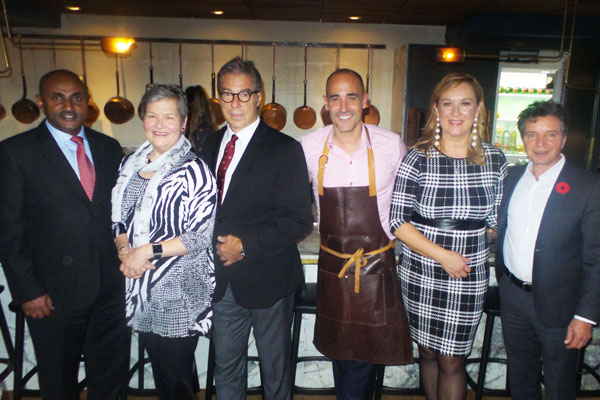 Ethiopian Airlines is using some culinary star power to promote the country it’s based in.

The carrier held a Toronto event last night (Nov. 8) that featured Ethiopian coffee, cuisine and dancing, and had Toronto-based celebrity chef Dave Rocco – who has visited Ethiopia and other countries in the area and whose travels have been showcased on TLN – to sing the African nation’s praises.

Rocco, who has ties to the host restaurant Oretta and has released a cookbook, lauded the “great restaurant scene” in Addis Ababa, and labeled the Ethiopian city of Lalibela – famed for its ancient subterranean churches – “one of the holiest cities in the world.”

Passengers can arrive in Addis Ababa [from Toronto] in the morning and because of quick connections have lunch pretty well “anywhere in Africa,” he said.

Worku said Ethiopia has “diverse historical attractions,” with the remains of Lucy – believed to be the oldest human remains found anywhere – discovered in Ethiopia and now displayed in an Addis Ababa museum. “You are all Ethiopians… You all came from Lucy,” Worku said.

“We have so much to give the world.”

The carrier uses Dreamliners on its Toronto route and Bombardier aircraft on flights within Ethiopia.

Rocco told the gathering that he has travelled with Ethiopian Airlines, which he labeled a “really fabulous airline.”