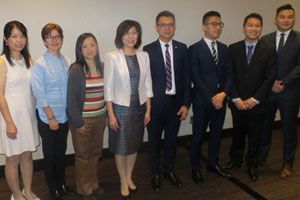 The Taiwanese carrier plans to add two more weekly flights on both its Toronto and Vancouver routes, giving the carrier daily non-stop service from both cities to Taipei.

The Vancouver route will gain the added flights June 15, while the Toronto route will go daily June 16.

The announcement comes as the Star Alliance carrier marks seven years of linking Taipei and Toronto, a development that Suzi Tsau of EVA Air’s Toronto office praised as impressive.

“There are really no other words to describe the accomplishment we have achieved in the past seven years,” she told a March 8 Toronto gathering.

Tsau’s colleague Ryan Chiu in turn noted EVA has a network that reaches throughout Southeast Asia and the Taiwan Tourism Bureau offers free five-hour tours of Taipei for those who have connections in that city. Those taking the tours can stow their bags at the airport.
Chiu also noted that those buying a round-trip EVA ticket from Toronto to one of its Southeast Asia destinations this month can get a free return ticket from Vancouver to that same Southeast Asian city, something the airline says will look attractive to those departing from Toronto who have a family member or friend in Vancouver they wish to vacation with.

EVA has 132 flights throughout Southeast Asia and 155 to Northeast Asia.

Catherine Hsu, director general of the Taipei Economic & Cultural Office in Toronto, told the event that EVA is “one of the world’s top 10 airlines” and Canadians she knows who have travelled with it praised their “pleasant flight with EVA Air.”

Hsu added that over 100,000 Canadians visited Taiwan last year, which saw a 17% increase in Canadian visitations from 2015.
EVA Air also received a pat on the back from Kayla Shubert, who oversees the Tourist Authority of Thailand’s Canadian operation. Shubert noted that Thailand works with Taiwan to attract people eager to see two countries on the same Asian vacation.

“It’s a perfect choice,” Shubert said of travel with EVA Air, which includes Bangkok in its network.