Five Weddings And An Elopement

An Inside Look At Some More Agent-Booked Destination Weddings 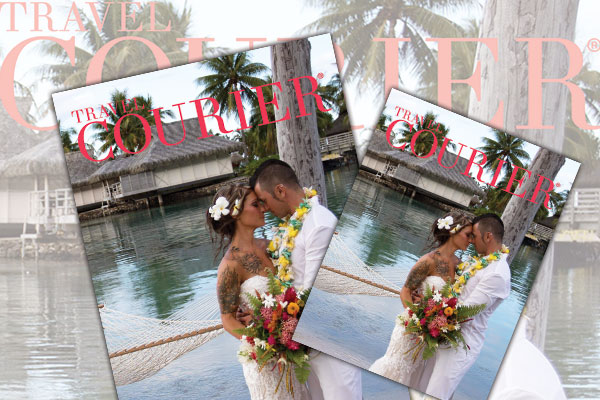 After an eight-year engagement, Courtney Kayter and Nick Erfle decided the time had come to lock in plans for a destination wedding in Montego Bay, Jamaica with a guest list of 100 friends and family members.

The venue was booked and the invitations were mailed, but then the couple second-guessed their plans as guests had to make a large financial decision and commitment ahead of the big day.

“Neither of us had ever really wanted a large wedding and we just didn’t feel right putting a financial burden on family members in order to attend,” Kayter tells Travel Courier Digital. “In early 2018 we called the whole thing off and decided to embark on a bucket list trip. Our friends and family were shocked to find out we had cancelled our wedding, but we never hesitated for one second.”

Working alongside Tammy Prost of Tropical Escapes Destination Weddings & Travel Inc., the pair instead came up with a plan for a two-week island hopping weddingmoon in French Polynesia starting off in Papeete, Tahiti.

“The only way to describe the scenery was breathtaking, everything you see in pictures and in movies is absolutely true, it’s a lush fantasy of every shade of blue you can imagine,” she says. “Up until two months before the wedding date, we thought it was just going to be the two of us for the whole trip, however, my parents made a last minute decision to tag along and having them there meant the world to both of us.”

In follow up to last month’s Travel Courier digital cover story, here’s an inside look at some more agent-booked destination weddings, including Courtney and Nick’s elopement.

Check it out at http://travelcourier.ca/five-weddings-and-an-elopement/ .