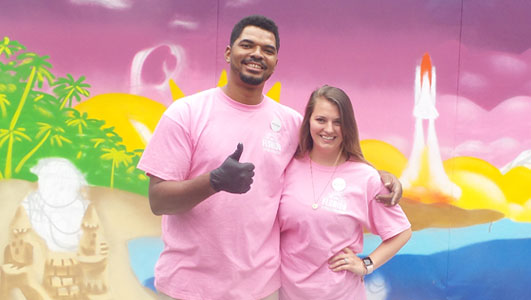 VisitFlorida’s latest effort to attract Canadians to the state was picture-perfect.

The tourism board teamed up with Air Canada Vacations Wednesday on a downtown Toronto promotion that included having multi-media, St. Petersburg, Florida-based mural artist Zulu Painter use spray paint alone to create a large, eye-catching image made of iconic Florida symbols, such as beach, sunshine, manatees and the Space Shuttle.

And says Summer Gonzalez, VisitFlorida’s marketing campaign manager, the images on the large artwork underscored the diverse experiences a Florida vacation can offer.

For instance, the central Florida city of Orlando is a mainstay of Florida’s tourist trade thanks in large part to its many theme parks but Gonzalez noted the surrounding area features the likes of zip-lining, and near Ocala is “the horse capital of the world,” ensuring that equestrian sorts will appreciate it.

“You can come to Orlando but you can explore out from there,” Gonzalez said.

First-quarter visitations to Florida this year were up 7.4%. Visits from this country in the same period rose 2.5%.

Gonzalez praised her destination as family friendly part of the world, and also said hot summer weather in the state shouldn’t dissuade people from visiting during this season.

Among other things, Florida is home to “quality water parks” and tourists can swim in pools and the ocean, and those in Central Florida can take advantage of coolish water that surfaces from natural springs.

“Florida is warmer during the summer but there are definitely ways to stay cool,” she said. “Florida, with all of our diverse experiences, is a year-round destination.”

Meanwhile, Gonzalez said Florida tourism officials – aware that our dollar struggles against the U.S. dollar – may later this year reintroduce a program first seen last fall that enabled Canadians wanting to vacation in the state to take advantage of a host of savings on lodging, transportation to the state and attractions.

Seen before the artwork Zulu Painter created in downtown Toronto are the artist himself and Gonzalez.