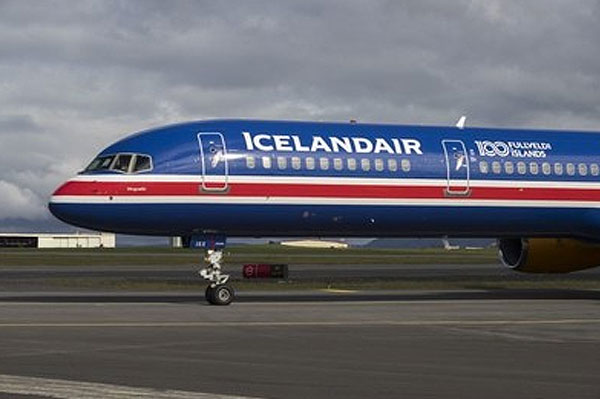 Icelandair, added some pride to the skies with the launch of its latest special livery, marking 100 years of Icelandic independence and sovereignty.

Proud of its rich Icelandic heritage, the airline has transformed one of its Boeing 757-300’s into a flying piece of artwork, bearing the Iceland national flag, bringing passengers closer to the nation’s history before they even step off the plane.

The unveiling of its ‘flag’ livery highlights another special moment in Iceland’s story by sending off passionate Icelandic soccer fans to support the nation as they make sporting history this summer.

The country is the smallest nation ever to qualify for soccer’s biggest stage and the airline is offering a special service this summer from Iceland to Russia for supporters.

Members of legendary fan group Tolfan led soccer fans in the iconic ‘Huh’ thunderclap ahead of boarding the milestone livery for the celebratory flight.

Bjorgolfur Johannsson, president and CEO at Icelandair commented: “We wanted to do something remarkable to celebrate this milestone in Iceland’s history and hope that both Icelanders and our guests from across the world enjoy flying in this special livery. Together with our Icelandic service we hope that our passengers enjoy time well-travelled with us by experiencing Icelandic culture and heritage before they even step off the plane.”

It becomes the third in Icelandair’s family of special liveries, joining “Hekla Aurora” and “Vatnaokull” which were introduced in 2015 and 2017 respectively and inspired by the northern lights and Europe’s second largest glacier.

Go to www.Icelandair.com for more.