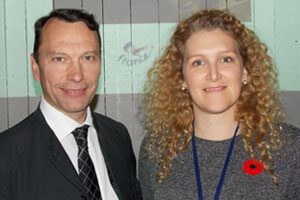 While more than 85 million travellers visited France in 2015 for a variety of reasons, the country’s consul general in Toronto, Marc Trouyet made it clear that there are so many new things happening – not to mention places to explore – that there’s always a reason to promote the benefits of a visit to his country.

The theme of the evening was the French Connection and along with officials from Atout France, the Toronto gathering also featured representatives from Air Canada, Scenic, Rennes, Nantes, the Loire Valley, Destination Western Front 14-18 and the French Number.

Melanie Paul-Hus, deputy director of Atout France, noting that over a million Canadians visited France in 2015, told here audience that the evening’s theme was chosen because travel and tourism is all about people getting closer to one another and the fact that France has become very good at connecting people.

As well, the travel trade audience also had the opportunity to get the latest updates from the suppliers during the evening.

Seen in the photo, from l to r, are the Consul General for France in Toronto, Marc Trouyet with Atout France’s deputy director, Melanie Paul-Hus during the event.