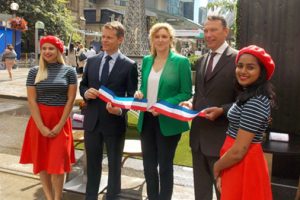 It was a festive scene on the Toronto International Film Festival’s (TIFF) Festival Street (located on King St. West between University Avenue and Peter Street) as Air France,the France Tourism Development Agency and the Consul General of France in Toronto welcomed travel trade types to the opening of the Air Bistro Paris.

Air France is the official airline of TIFF 2017 and until Sept. 10, its Air Bistro Paris – complete with a four-metre-plus Eiffel Tower – will welcome festival-goers with a “Parisian cafe style” experience.

Roland Coppens, commercial director Air France-KLM Canada, was in an upbeat mood, telling his audience at the ribbon-cutting ceremony that the airline is “proud to be sponsoring [TIFF’s] Platform competition,” before adding that the carrier is also “delighted to adding a French Touch to Festival Street with a pop-up bistro where festival-goers will be able to enjoy a typical French cafe experience – complete with macarons.”

Big news of the day, though, was Coppens telling the trade audience that Air France will be offering Dreamliner service out of Canada beginning in November of this year.

As for Atout France (officially known as the France Tourism Development Agency), its director for Canada, Melanie Paul-Hus observed: “We are glad to be supporting Air France with the Air Bistro Paris and we hope to see a lot of festival-goers there.”

Paul-Hus noted as well that: “France is the cradle of the cinematic arts. Its capital, Paris, brims with cultural sites that both filmmakers and travellers draw inspiration from.”

For more, go to http://www.france-prestige.ca/ for more.

In the photo:
Seen from l to r, during the ribbon-cutting for the Air Bistro Paris are: Air France-KLM’s Roland Coppens; Atout France’s Melanie Paul-Hus; and the Consul General of France in Toronto, Marc Trouyet.