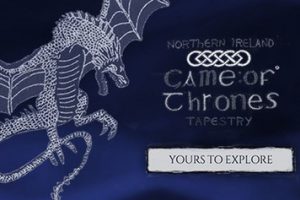 Game of Thrones Season 7 has hit the screens. Northern Ireland is one of the main filming locations for the hit TV series, and to immortalize the unforgettable series locations, from Winterfell to the Iron Islands, Tourism Ireland has unveiled a giant, 77-metre long, Bayeux-style tapestry.

The epic tapestry brings to life the trials and tribulations of the show’s characters in its most heroic and infamous scenes.

The tapestry is made with linen from Northern Ireland and depicts Game of Thrones Seasons 1 to 6 – with blood red weddings, golden Lannister hair, emerald green wildfire, cold-blue White Walkers and jet black ravens. To explore the tapestry, visit http://www.ireland.com/tapestry.

The tapestry is being displayed in the Ulster Museum in Belfast and will be open to the public starting July 22.

As Season 7 unfolds, new sections of the tapestry will be revealed each week, capturing key events from the previous episodes. Tourism Ireland will unveil and share these new sections via social media, where fans will be able to watch time-lapse footage and cinemagraphs as new segments are created.

To learn more about the tapestry, fans can visit Tourism Ireland’s website, Ireland.com – where an interactive “Northern Ireland Game of Thrones Tapestry” app will allow followers to zoom in and explore details of the tapestry in full, reliving some of the best scenes from previous episodes.

Tips on how to plan a behind the scenes visit to Game of Thrones Territory can also be found at http://www.ireland.com/gameofthrones.

To learn more about Game of Thrones filming locations in Northern Ireland and explore the new tapestry app, visit http://www.ireland.com/features/game-of-thrones-tapestry.