Home › Destinations › Giddying up for the Calgary Stampede

Giddying up for the Calgary Stampede 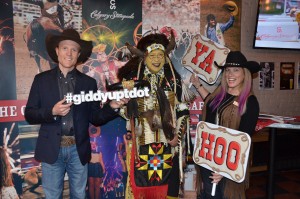 Gearing up for the annual event, taking place this year July 8-17, representatives from the Calgary Stampede were in Toronto last night (April 28) to highlight the event and announce the official lineup for country music venue Nashville North during the festival.

Among the headliners is The Washboard Union, the Vancouver-based band who was also on hand for a surprise performance.

“Tourism is one of the bright shining lights in Alberta at the moment and the Mountains are going to have the best year ever – and Banff and Jasper. We’re looking forward to having a great year and celebrating – it’s always a citywide celebration. Come July we’ll all be ready to party.”

And what should first-timers know about the Calgary Stampede? First off, she says, dressing the part is key.

“Cowboy up as we say. Just put a lid on it, everyone looks good in a cowboy hat – you just feel apart of the action that way,” she says.

Some of the icon events not to miss include the pro rodeo rides every afternoon, the chuckwagon racing, “a very unique sport to our part of the world,” as well as the grand stand show, and attending a free pancake breakfast. 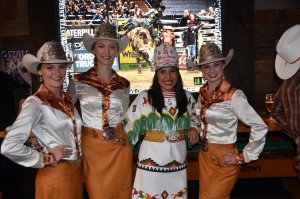