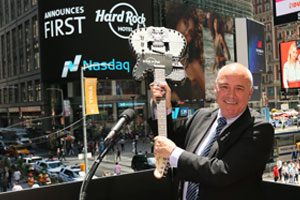 Hard Rock International has announced that the Hard Rock Hotel New York is slated to open late spring 2019, with the new-build, 445-room hotel in an area previously known as Music Row, and which was once a musical mecca for rock legends such as Jimi Hendrix, Eric Clapton and The Rolling Stones.

The Hard Rock Hotel will pay tribute to the city’s musical and cultural heritage with live music events and artist-inspired design elements. With Hard Rock International’s standing as curators of the world’s largest music memorabilia collection, the hotel’s design will feature museum-like displays adorning the walls. Memorabilia for the hotel will be carefully selected with a focus on contemporary artists who call New York home, as well as iconic musicians and pivotal moments in history that have shaped the city’s musical legacy.

In addition to musical experiences at every turn, Hard Rock Hotel New York will feature a welcoming lobby, complete with a signature restaurant and lounge, as well as lobby bar. A rooftop oasis will also be available where patrons can soak up the sun or dance the night away while enjoying views of Times Square and the Rockefeller Center.