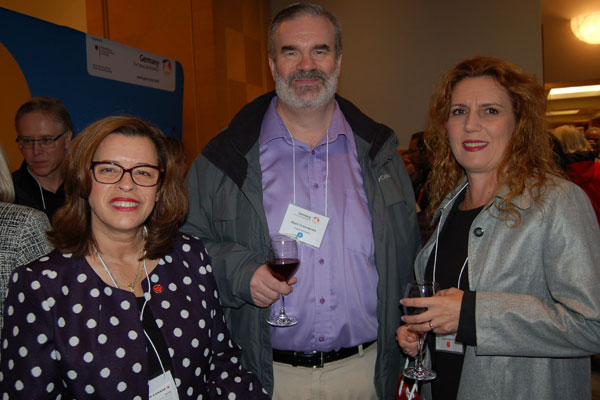 There is certainly no lack of choice for travellers considering reasons to plan a trip to Germany for a vacation. The country relies on its rich history, and relevant anniversary dates, to provide compelling arguments for just such a trip.

This was well demonstrated during the recent travel trade workshop in Vancouver by reps from the German National Tourist Office (GNTO) and Germany exhibitors. They met with travel agents and tour operators from the Vancouver area at the Fairmont Waterfront Hotel. Round-table presentations were conducted by the Germany regional reps, airlines and other partners.

Attending travel pros learned that 2019 has been themed with subjects as diverse as the Berlin Wall and the Bauhaus school of industrial/architectural design.

Year 2019 has marked 30 years since the fall of the Berlin Wall, but the anniversary of the actual event is on Nov. 9. To mark this moment in history, a seven-day, city-wide festival is being planned for Nov. 4-10, as Berlin is transformed into an open-air exhibition and event venue.

The important stages in the fall of the Wall will be demonstrated at seven key locations: Alexanderplatz, Gethsemanekirche, Brandenburger Tor, Schlossplatz, Kurfürstendamm, East-Side-Gallery and the Stasi headquarters in Lichtenberg. There will be large projections of historical pictures/films and sound installations, plus concerts, lectures, readings and witness talks. The festival will end on the evening of Nov. 9 with performances by renowned musicians, orchestras and bands.

Meanwhile, it is 100 years since the founding of the famous Bauhaus artistic and architectural design movement. Bauhaus was sparked in Weimar in 1919, then migrated to Dessau in 1925, before being shut down in Berlin by the National Socialists in 1933. Since those 14 short years, Bauhaus concepts have been passed on and its products relaunched, imitated and further developed to present day.

One event marking the founding of Bauhaus is the Bauhaus-Archiv / Museum für Gestaltung exhibition at the Berlinische Galerie in Berlin. It is presenting famous, familiar and forgotten Bauhaus originals and recounting the history behind the objects. Around 1,000 exhibits are on display, including art and design from the museum collection, plus exceptional loans from international collections.

There are also new Bauhaus museum exhibits in Weimar and Dessau, said Kristen Barth, the project manager for the Investment and Marketing Corp. of Saxony-Anhalt state.

Looking ahead, agents and tour ops learned that 2020 will be themed with a tribute to famed composer Beethoven in mind, as well as with the performance season of the rarely seen Oberammergau Passion Play. Year 2020 marks 250 years since the birth of Beethoven – although commemorative events will actually get underway on Dec. 16 in Bonn.

Also in 2020 will the once-per-decade performance of the Passion Play – the story of Christ – at Oberammergau in Bavaria. This will be the 42nd staging of the performance since 1634 and will be presented from May 16 to Oct. 4, 2020.

Some of those in attendance at a Germany tourism event in Vancouver recently were (l-r) Edna Ray, BC regional sales manager for Air Canada; Mark Greenwood, director of operations for Travel Masters; and Zelma Demeter of Metro Travel Ltd. in Vancouver.