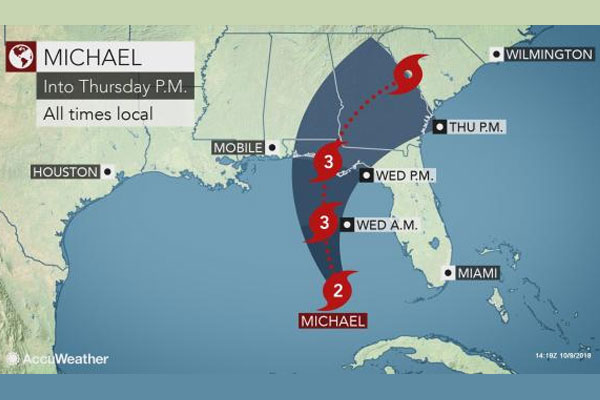 A powerful Hurricane Michael has made landfall over the Florida Panhandle, battering the coastline with winds of up to 150 mph.

Described as the strongest hurricane to ever strike the Florida Panhandle, storm surge estimates are anywhere between nine and 14 feet.

“Historically, hurricanes that approach the Florida coast in this area tend to weaken slightly prior to landfall, but little difference in impact related to wind and storm surge is likely regardless,” said Kottlowski.

“Impacts from Hurricane Michael along the Florida Panhandle will include a dangerous storm surge, flooding rainfall and damaging winds.”

Residents and visitors are encouraged to heed all evacuation orders as they are given.

VISIT FLORIDA, meanwhile, is currently monitoring Hurricane Michael and is in constant communication with the State Emergency Operations Center.

“AccuWeather predicts that Hurricane Michael’s total damage and economic impact in the US will be close to $15 billion,” noted AccuWeather founder and president Dr. Joel N. Myers. “The greatest impacts will be near and east of where the hurricane’s eye makes landfall, and particularly along the coastline because of angry seas in a dangerous storm surge being driven inland by onshore winds.”