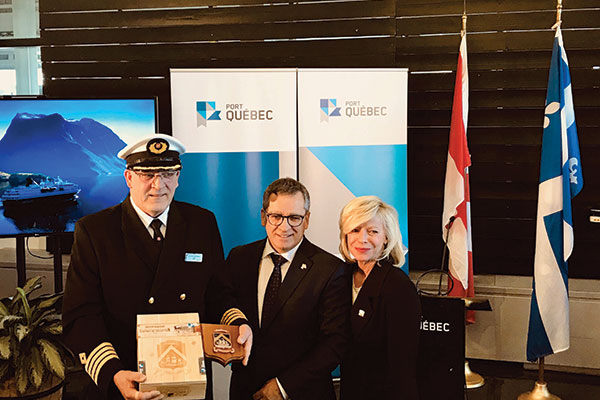 In the presence of the Minister of Tourism, Caroline Proulx, The Port of Québec has launched its earliest international cruise season with the arrival of Hurtigruten’s MS Fram at the Ross Gaudreault Cruise Terminal.

The expedition vessel is the first of its kind to call at the port which has an expanding season and facilities to accommodate a variety of ship sizes and types.

Hurtigruten operates a growing fleet of 16 ships exploring destinations around the world such as Antarctica, South America and Caribbean, Canada, Northwest Passage, Svalbard, Greenland and Norway.

“The Port of Québec is thrilled to welcome so many new cruise lines this summer starting as early as May 2 with the MS Fram. Hurtigruten is a pioneer expedition ship company paving the way for an evolving cruise industry. Their vision is aligned with the strong commitment of the Port of Québec in sustainability and we are fortunate that they chose Québec City as their turnaround port,” said Mario Girard, president and CEO of the Québec Port Authority.

Holland America Line (HAL) has the longest and most extensive cruise season in Quebec. Four HAL ships will make 34 calls from May through October. Princess Cruises will offer six 10-day sailings and one 13-day repositioning cruise on its newly renovated Caribbean Princess, with overnights in Quebec on every sailing. Princess will also make its first summer call in Quebec, departing on Aug. 9. Cunard’s Queen Mary 2 is offering an extended Canada deployment in 2019 with five overnight calls to Quebec between summer and fall 2019.