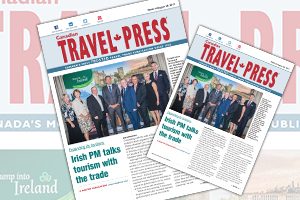 Although Ireland is experiencing a robust period of tourism growth – notably a 21% increase in North American visitors over the first six months of the year, not to mention a 60% growth in overall Canadian arrivals over the past three years – the Irish Prime Minister announced the island destination wouldn’t become complacent and plans to expand its global footprint in the context of trade, tourism and investment.

“Earlier on this morning I announced the government’s plan to double Ireland’s global footprint around the world by 2025 – part of that’s as a response to Brexit, as a small country we need to be out there more, have a greater local presence, but more than Brexit, it’s a response to a changing world,” he said. “The world is more globalized, it’s getting smaller and smaller.”

The initiative would see new and bigger embassies and consulates in place around the world, the expansion of Enterprise Ireland and strengthened cultural ties between Ireland and other countries in an effort to encourage more travel and global investment into the Emerald Isle.

“Tourism is also very important economically – it sustains about 250,000 jobs in Ireland, it brings in a lot of revenue, particularly into places where there isn’t much industry or much other employment, it makes it doubly important,” he said.

While the occasion marked Varadkar’s first major international visit in his current position, joined by Tourism Ireland’s CEO Niall Gibbons and Head of North America Alison Metcalfe, he told the group of roughly 35 industry executives on hand for the lunch meeting, which included key supplier partners from Transat, Air Canada Vacations, Collette, Royal Irish Tours, Aer Lingus, and the Globus family of brands, he’s visited Canada many times both in personal and official capacities as Ireland’s Minister of Transport, Tourism and Sport, a post he held from 2011 to 2014.

For the full story … and more … check out this week’s digital edition of Canadian Travel Press.