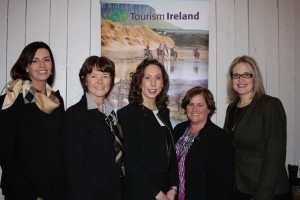 Irish tourism officials, including Alison Metcalf, executive vice-president, US & Canada, Tourism Ireland, were in Toronto yesterday to update travel industry personnel on the latest happenings in the Emerald Isle.

The delegation, which is visiting Hamilton today and then Ottawa, includes 11 industry partners.

Metcalfe noted that Ireland is coming off a strong year from Canada with 190,000 Canadians visiting, up 20% from 2014.

“We’re doing well, but we don’t take anything for granted,” said Metcalfe. “We continue to build and invest of the ground.”

She attributed the success to promotions pushing Ireland as a year-round destination and easy air access.

Dana Welch, manager, Canada at Tourism Ireland, unveiled upcoming initiatives for Tourism Ireland which include the continued promotion of The Wild Atlantic Way and the Causeway Coastal Route. In Northern Ireland, it’s the Year of Food & Drink with special activities and festivals taking place all through 2016. A promotion on Ireland’s Ancient East is also being launched, focusing on 5,000 years of history.