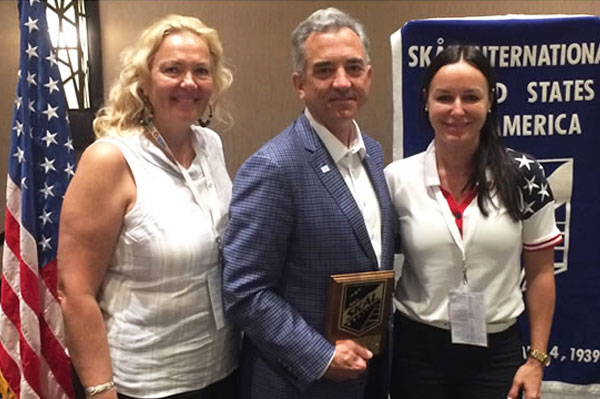 Burcin Turkkan, president of Skal International USA and a member of the Skal Club of Atlanta, Georgia, said, “The leaders of Skal International in the United States want to recognize annually major contributions by an individual who has helped to grow tourism to and within the United States as part of our role as a tourism leadership group comprised of members from all segments of the travel industry.”

Turkkan continued, “Fortunately, we did not have to look too far to find the right first recipient. Chris Thompson has distinguished himself by guiding a first-class team of professionals at Brand USA, who promote the United States around the globe. Under his leadership, Brand USA has produced two outstanding IMAX movies with global distribution: National Park Adventure and America’s Musical Journey. Chris is a consummate leader and well respected throughout the tourism world, both here and abroad.”

Receiving the honour, Thompson said, “It’s an honor to have my peers recognize me in this way. The members of the North American Skal club have supported me and guided me in so many ways throughout my career, and to be the first recipient of the National Tourism Leadership Award is humbling.”

And he noted, “I am proud of the work we are doing at Brand USA to promote the United States as a premier travel destination. The USA remains as aspirational as ever, and I look forward to welcoming all of you to the USA next year for the 2019 Skal North American Congress.”