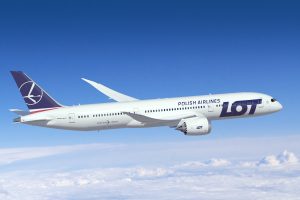 Three new Boeing 787-9 Dreamliner aircraft seating 294 passengers each are scheduled to start operating on LOT’s routes to Toronto, Chicago and New York in the spring and summer of next year.

Tickets for the connections served by the Polish carrier’s new planes are available for sale.

There are currently eight wide-body Boeing 787-8 Dreamliner aircraft in LOT’s fleet. Each of them offers 252 seats in three classes: 18 in business, 21 in premium economy and 213 in economy.

The deliveries of larger 787-9 Dreamliners are expected to commence in the spring of next year. Each of them will be capable of accommodating as many as 294 passengers (24 in business, 21 in premium economy and 249 in economy class). The Polish carrier has ordered the total of four larger B787 aircraft, with three of them starting service in 2018, and the last one joining the fleet in 2019.

Three of the four new planes will appear next year on selected long-haul routes departing Warsaw, including Toronto from the beginning of July.