Lufthansa’s Flagship A350-900 Coming To Toronto 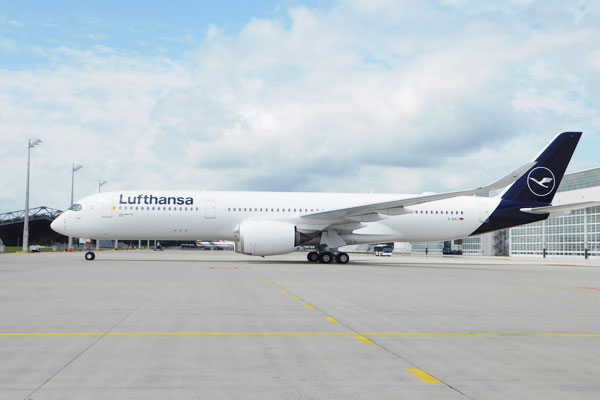 When Lufthansa’s Flight LH494 touches down at Toronto’s Pearson Airport on Sunday (March 31), it will mark the first time an Airbus A350-900, which Lufthansa bills as the “world’s most state-of-the-art, long-haul aircraft,” arrives in the city from Europe.

Flight LH494 will depart Munich at 3:40 p.m. and is scheduled to arrive in Toronto on March 31 at 6:35 p.m. local time. The return flight, LH495, will depart from Toronto at 8:25 p.m. and arrive in Munich at 10 a.m. the following day. All times are local. This flight between Toronto and Munich will travel daily.

The Airbus A350-900 uses 25% less kerosene, produces 25% fewer emissions and is significantly quieter on take-off. The aircraft has space for 293 passengers with 48 seats in Business Class, 21 in Premium Economy and 224 in Economy Class. At just under 5.6 metres wide, the cabin of the new Airbus is more spacious than comparable models of aircraft.

Business Class passengers enjoy a self-service area where they can help themselves to snacks and drinks throughout the flight.

Premium Economy Class passengers can check two pieces of luggage at no charge, each with an allowable weight of up to 22.7 kilograms. Travellers can conveniently select their food from a menu card, and the food is served on porcelain dishes.

Throughout the cabin, passengers can use their own mobile device as a second screen, as well as pre-selected programs from the on-board entertainment system, up to six weeks prior to flight time.

The aircraft features improved cabin pressure and an LED lighting system that adjusts with the day and night-time rhythm of passengers.