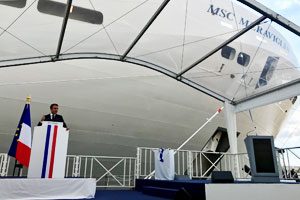 MSC Cruises officially took delivery of the MSC Meraviglia yesterday (May 31) in France.

During the ship’s flag ceremony, which pays tribute to centuries-old maritime tradition, the company’s newest flagship received its official flag and blessings for good fortune.

At 171,598 GRT and with a guest capacity of 5,714 (4,488 double occupancy), Meraviglia is both the biggest ship to ever be built by a European ship owner (MSC) and the biggest to come into service this year.