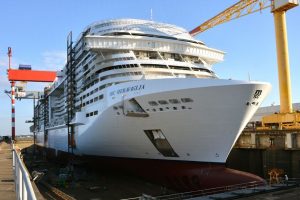 MSC Cruises revealed the name of its second STX France-built Meraviglia-generation mega cruise ship on Friday – the MSC Bellissima which will come into service in spring 2019.

The announcement was made at STX France’s shipyard in Saint Nazaire as the company celebrated the float out of MSC Cruises’ first next-generation ultramodern mega ship, MSC Meraviglia, due to come into service in June 2017.

“MSC Bellissima is a name that embodies the beauty and the magnificence of this entire next generation of MSC Cruises ultramodern mega-ships, so rich with new features and amenities for guests of all ages and interests,” said Gianni Onorato, chief executive officer of MSC Cruises. “We are so pleased to be able to make this announcement on the very day that her sister ship MSC Meraviglia is touched for the first time by water, a moment that symbolizes the real ‘birth’ of a ship.”

The float out is a key milestone in the construction of a ship – the dry dock is flooded, the ship is moved to a wet dock, where it then enters the final phase of construction.

Special on-board features include a specially designed Carousel Lounge where Cirque du Soleil artists will perform shows created exclusively for MSC Cruises; a 315-ft.-long Mediterranean-style promenade with a 262-ft. LED sky that runs through the centre of the ship; and an enhanced MSC Yacht Club, the line’s exclusive ship within a ship luxury concept, with its own private facilities spanning three decks.