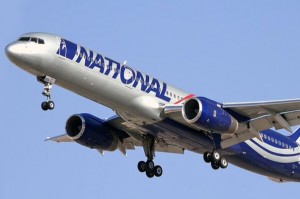 Orlando-based National Airlines has announced changes to its planned summer flight schedule, including the postponement of expansion at Long Island MacArthur Airport (ISP) in New York and transitioning to seasonal service at Windsor International Airport (YQG) in Ontario.

Windsor service will transition to seasonal status beginning May 22 as the company analyzes market demand and fleet priorities.
National is delaying the June 1 launch of service from Long Island to Puerto Rico due to lack of available aircraft for expansion service. The change affects planned flights from Long Island to Rafael Hernández Airport (BQN) in Aguadilla and Luis Munoz International Airport (SJU) in San Juan.

Reservations for routes affected by these changes are no longer being accepted, and customers who have already purchased tickets will receive a full refund to their original form of payment from the escrow account.