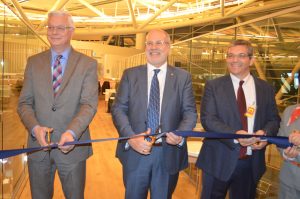 A new executive lounge for passengers flying on airlines that are part of the SkyTeam alliance opened with a splashy event air-side at Vancouver International Airport this week.

It is SkyTeam’s first lounge in the Americas and seventh worldwide.

The upper level space was constructed with an open-air concept near to the roof support structures of the terminal, with views of passenger traffic below and expansive views of the scenery outside. The lounge was designed to offer SkyTeam customers a high-end, pre-flight experience with a range of amenities. These include locally sourced food and beverages, self-serve buffet counters and table and a noodle bar for meals prepared by an in-house chef.

The Vancouver lounge is available to Elite Plus, First and Business Class customers on any of the Sky Team airlines that operate through YVR. These include Aeroméxico, Air France, China Airlines, China Eastern, China Southern, Delta Air Lines, KLM Royal Dutch Airlines, Korean Air and Xiamen Airlines, with up to 75 weekly departures,

The lounge is managed on behalf of SkyTeam by Global Lounge Network and is situated close to luxury retail outlets like Gucci and Cartier near to Gate 53 in the new duty free area of the International Terminal.

“Vancouver is a key SkyTeam gateway between the rest of Canada, the United States, Asia and Europe,” said Perry Cantarutti, CEO of SkyTeam.