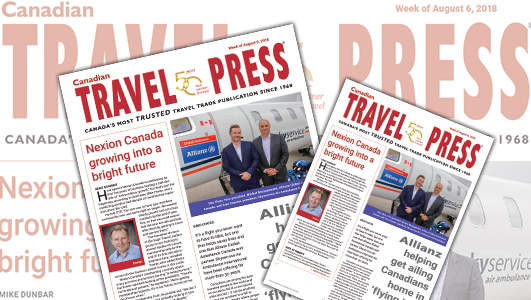 Host agency Nexion Canada is celebrating its first five years in business, lauding a half-decade of “extraordinary growth,” but that’s just the beginning, according to chief exec Mike Foster, who’s predicting another half-decade of membership expansion down the road.

In this week’s digital edition of Canadian Travel Press, he told Quebec editor, Mike Dunbar: “Our aim was to have 350 members on board by now and we’re right on target. We wanted steady growth and not crazy numbers by the end of year five so that we could assimilate the new arrivals and look after them by getting to know and service them.”

The Canadian division of the huge Travel Leaders group is now looking to almost double its current membership tally by the end of its first decade in business here, revealed Foster, who added that a move into the Quebec market is also in the cards.

Nexion Canada’s membership currently spans every province and territory barring ‘la belle province’ but Foster said he’s looking at the possibility. “There’s no timeline at present,” he explained. “We’re getting membership requests; it’s in our future but as yet we don’t know when.”

On the membership front, he pointed out, “We don’t want to get too big so we’re probably looking at 500 to 600 agencies by the end of our first decade.”