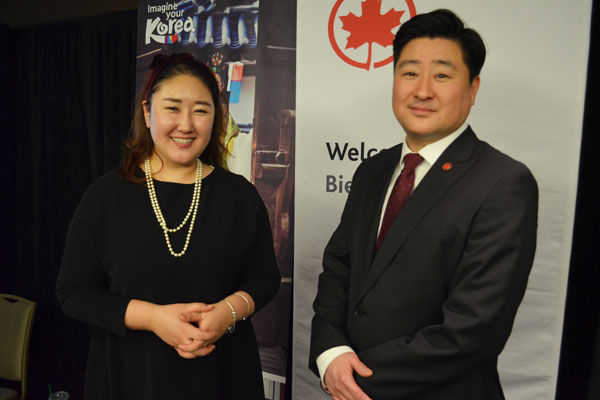 The South Korean province of Gangwon, so recently the hosts of the 2018 Winter Olympic Games, was a lead sponsor and presenter at a special Korea Tourism pre-Christmas dinner in Richmond, BC that was also sponsored by Air Canada, reports western Canada editor Ted Davis.

Representing Gangwon was MJ Lee, manager of the tourism marketing department for the province. She took invited guests on a virtual tour of the province, using audio visual tech to illustrate the trip. Guests thus learned, for example, that Gangwon has nine top ski resorts, some of which offer English speakers and services for accommodations, lessons, parties, ski camps and competitions.

Providing a national outlook on tourism were executive staff from the Korea Tourism Organization. Randy Snape, national marketing manager for the KTO in Canada, led this part of evening and updated guests on the tourism news updates and forecasts for arrivals.

A key factor in driving those arrivals is the increasing amount of airline capacity to Korea by airlines, including Air Canada. AC operates flights to Seoul from both Vancouver and Toronto. From Vancouver, these flights operate daily to Incheon (Seoul) on a year-round basis, as well as daily to ICN from Toronto during the summer and six times weekly in the winter.

As of June 1 this year, AC started offering 34% more seats from YYZ by operating a larger aircraft. The B777 on the route provides more seats in all three cabins; Signature business class, premium economy and economy class.