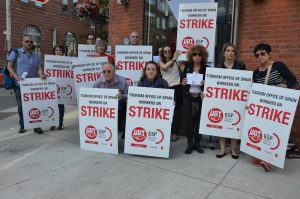 In the name of salary shame and inequality, Toronto-based employees of the Tourist Office of Spain took their strike to the streets yesterday (June 14) — staging a picket line by the entrance of an event put on by the Andalusia Tourist Board and the Tourist Office of Spain.
Union members, who were protesting a “critical economic situation,” including a near decade’s long salary freeze during which officials working for the Spanish government, such as ambassadors, received salary hikes in the past year alone, were joined by colleagues of the Consulate of Spain and the Commercial Office of Spain in Toronto.