Home › Cruise › On The Edge With Celebrity

On The Edge With Celebrity 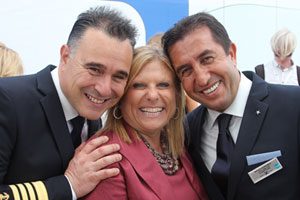 In an affair worthy of Hollywood, Celebrity Cruises held its much anticipated “reveal” yesterday of the new Celebrity Edge in Miami (as well as an evening event in Toronto), the first in its new “revolutionary” Edge Class of ships.

PressToday’s Greg Coates was on hand in Miami as plans for Edge, touted to be the first ship designed entirely in 3-D, were unveiled at parent company Royal Caribbean Cruises Ltd.’s Innovation Lab.

Edge is Celebrity’s first new ship in six years and the first in 10 years to be designed by Celebrity, who teamed up with design icon Nate Berkus (Design Ambassador for Celebrity’s newest class of ships), famed London designer Kelly Hoppen (who took the design lead on the ship’s accommodations) and architect Tom Wright of WKK.

Unique features on the 2,918-passenger ship include a revolutionary 90-ton platform – dubbed the Magic Carpet – the size of a tennis court that will be cantilevered over the side the ship and serve as a tender boarding platform on Deck 2 and a venue for “Dinner on the Edge” on Deck 16. 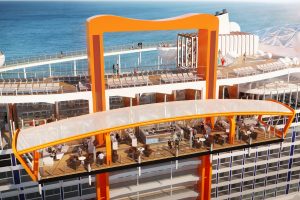 Thanks to its unique design, Edge will feature larger than average staterooms – 23% larger than Celebrity’s Solstice class ships – with bigger bathrooms, bigger beds, more storage and a “closer connection with the ocean.” This will partially be accomplished by the 918 Infinite Veranda staterooms. Their design eliminates the glass-and-steel frame between the cabin and balcony, replacing it with a set of folding French doors, which when open, expose the whole room to the air. A glass panel at the edge of the balcony slides up or down with the flick of a switch. 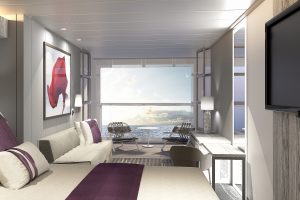 There are 146 entry-level suites, Sky Suites, triple the number on Solstice. 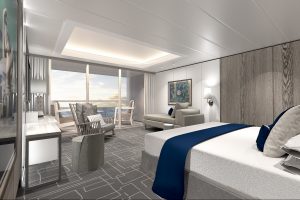 Suite guests all have butler service and their own private sundeck, called The Retreat, with an exclusive lounge, pool and restaurants.

For more on Celebrity and Edge, watch for upcoming issues of Canadian Travel Press and Travel Courier. 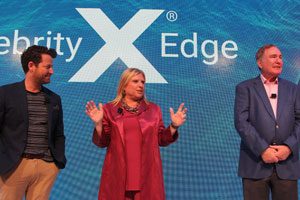