Home › Airlines › On The Road With Sunwing

On The Road With Sunwing 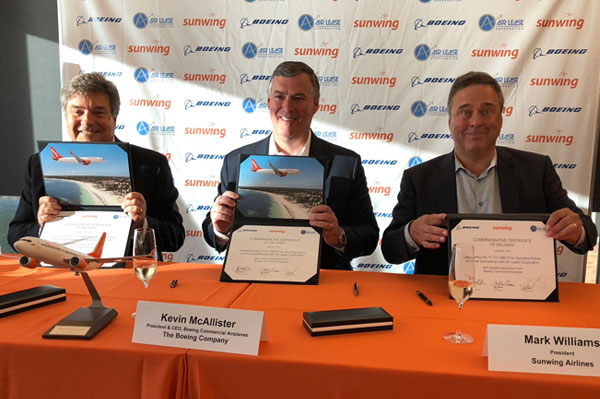 Sunwing Airlines has taken the keys, so to speak, of its newest acquisition with the delivery of its first Boeing 737 MAX 8 aircraft.

The aircraft – which will be flown from Seattle to Toronto later today (Friday) – is the first of four new Boeing 737 MAX 8 aircraft acquired by the company as part of a lease agreement concluded with Air Lease Corporation in late 2014. An official signing over ceremony (pictured) was held last night in Seattle.

The $350 million deal also included the acquisition of two further Boeing 737-800 aircraft. The second Boeing 737 MAX 8 aircraft will be delivered next week, with the remaining two 737 MAX planes anticipated to be delivered by April 2019.

Sunwing Airlines’ president, Mark Williams commented: “The 737 MAX 8 aircraft is an integral part of Sunwing’s overall expansion plans across an increasing number of both Canadian and U.S. gateways and illustrates the evolution of the company. We’re really excited. This is a big deal for us.”

And Williams continued: “Sunwing may have increased in scale however what drove the company in the early 2000s is still central to our business today – in particular, the airline’s commitment to its passengers that when they travel with Sunwing, they travel with an award-winning airline and one of Canada’s most modern fleets.”

Press Today’s Greg Coates is on the road with Sunwing and he’ll have a full report in upcoming issues of Canadian Travel Press and Travel Courier, so stay tuned.