Home › Destinations › On The Road With Switzerland

On The Road With Switzerland 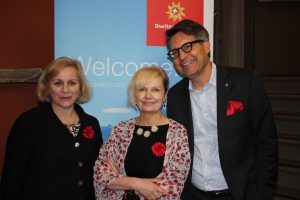 Switzerland Tourism is in the midst of a North American tour and made its only Canadian stop in Toronto yesterday (April 4) hosting a “Road to Switzerland” grand gourmet media luncheon, followed by an energetic trade event highlighted by a networking session, workshops and dinner.

Along with Switzerland Tourism were 40 Swiss partners, including 15 destinations, 15 hotels, and airline and rail representatives. Guests also included a master chocolate maker.

Alex Herrmann, director, Americas, Switzerland Tourism, told PressToday that such a big road show – which also includes stops in Chicago, New York, Boston, Los Angeles and San Francisco – is a first for Switzerland Tourism, which is coming off a strong 2016, preceded by its best year ever in 2015.

Herrmann said that following a slight dip in numbers from Canada last year, the trend is once again positive with November to February figures up 0.5% (and February alone up 1.4%).

“Canada is a very important market for us [and] from what we’re told [from tour operators, hoteliers, etc.] it’s going to be a good year,” said Herrmann.

Trending high for the European nation is the pre- and post-river cruise sector, which helped the nation have its best year ever in 2015.

“This is huge for us,” said the tourism official.

Key to Switzerland’s attractions are its nature and cuisine. Tourism officials also took the time to promote the country’s new hash tag – #InLoveWithSwitzerland.

The most popular regions visited in 2016 from Canada were Zurich Region, Geneva Region, and Valais Region. The biggest growth region was Graubuenden, which saw a 14.3% increase in Canadian overnights in 2016.