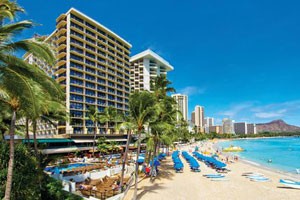 The future looks bright these days for Outrigger Hotels and Resorts.
In fact, W. David P. Carey III – who has successfully led the company for more than 30 years – will transition into a lead role on the Outrigger advisory board and focus on development, community relations and strategic growth of the company.

As a result of that move, KSL Resorts co-founder and CEO Scott Dalecio will take over day-to-day oversight as Outrigger plans for future enhancements.

Additional appointments include the promotion of Outrigger veteran John Neeley, vice-president of information technology, who has worked with Outrigger for 24 years and David Nadeau as incoming chief financial officer, a position in which he has served for more than two decades.

Neeley and Nadeau will play integral roles in alignment of technology and innovation with Outrigger’s current assets and expansion plans.

Dalecio observed, “Outrigger is poised to enter its next phase of reinvestment and growth because of the solid foundation built by David Carey and his team; we’re grateful that he will continue to contribute his knowledge and expertise as a member of our board.”

And he continued, “From Waikiki to the Maldives, we are excited to invest in the future of Outrigger; by infusing additional support and resources at our properties, hosts will have the tools to perform at the highest level and further elevate the Outrigger guest experience.”

Carey noted that, “I am confident that the new team will lead Outrigger to new heights into the future and look forward to helping the company maintain its strong position in the community.”

The company expects to reinvest upwards of $100 million over the next few years to improve its hotels and resorts. It will also add both resources and expertise for business development and project management.

Along with the planned capital improvements, major technology upgrades and a renewed focus on host training and support will further strengthen the long-term sustainability of the company and additional opportunities for employees.

Dalecio has worked in the hospitality industry, including Hawaii, for over three decades. As a hospitality leader, he has been responsible for operating some of the most iconic hotels, resorts and clubs in the industry.