Putting The Spotlight On Collette 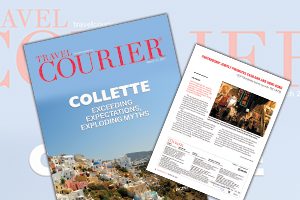 Doug Patterson wants to set the record straight when it comes to motorcoach tours.

Patterson, president of Collette Canada, says there are a number of beliefs he wants to dispel about a product that accounts for a large share of Collette’s business, reports Ian Stalker in this week’s digital edition of Travel Courier.

“Coach touring still has to live with its myths,” says Patterson, who cites commonly held beliefs that those who go on coach tours are all elderly, participants are “shackled to the coach” and itineraries feature “chicken dinners every night.”

Coach tours are increasingly attracting a younger clientele drawn by the value provided by their itineraries and have a worldwide satisfaction rate of 98%, and “so the people are basically saying, ‘This exceeded my expectations.’”

Forty-two percent of Collette clients travel again with the company in a three-year span, which is much higher than the average among the industy according to Patterson.

Patterson, a 30-year veteran of the travel industry, says his own “Canada-centic” employer is a great example of a company evolving to meet the needs of diverse groups wanting to see the world. Classical itineraries are what he labels “quintessential tours,” while Collette has nine Faith itineraries to offer to those interested in religion. River cruises are also available, while Explorations itineraries average around 18 people and “draw on experiences that would be nearly impossible to book on your own. On the explorations line, itineraries are driven by choice both in dining experiences and activities. If you’re interested in wine-tasting in Tuscany, an explorations tour may allow for a visit to the winery and a meal that has been developed for just the group. Culinary demonstrations become lessons in Spain, where an explorations tour may make paella and enjoy the fruits of their labour.”