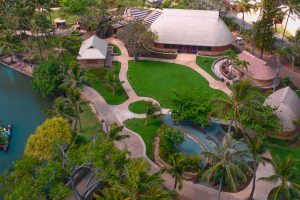 For the first time since 1993, the Royal Family of Tonga is making a special trip to Oahu’s Polynesian Cultural Center Saturday (June 11) to celebrate the grand reopening of its new Tonga Village.

Tonga is the last remaining monarchy in Polynesia still ruled by a king, His Majesty King Tupou VI, who will be joined at the ceremony by his wife, Her Majesty Queen Nanasipauu.

The Royal Family will be honoured with performances and gifts representing the peoples and cultures of the PCC’s six island villages, Tonga, Samoa, Fiji, Tahiti, Aotearoa and Hawaii.

Originally built in 1963 when the PCC opened, the Tonga Village has been completely restored to better showcase the Tongan culture, a process that has taken 16 months to complete. All of the structures have been built using traditional Tongan materials and lashes.