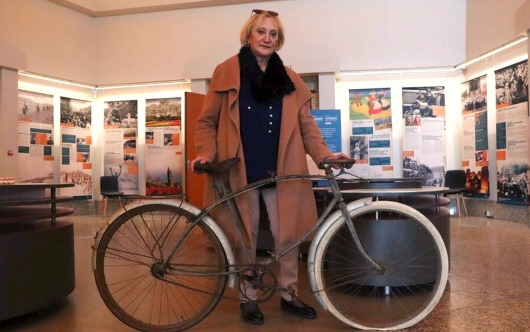 This past Christmas Eve, Normandy residents Marie-Claude Halot and Joëlle Letellier, contacted the Juno Beach Centre (JBC) with the news that their recently-deceased father Christian Costil had requested for the bike to be donated to “the Canadian museum” after his death.

“What’s so incredible about this artifact is that it’s so iconic,” said Marie Eve Vaillancourt, Manager of Exhibitions at the JBC. “For many, the historical photos of Canadian soldiers landing at Juno Beach with these bikes are very familiar. For over 75 years this bike was only a few doors away from our museum, kept by a diligent family who lovingly cared for it out of respect and gratitude for what the Canadians accomplished for the French back in 1944. It’s a very special moment when such symbolic object leaves the hands of its initial caretaker, passes through the family’s generations and finally arrives at our doorstep.”

Bicycles, including the Airborne Folding model, were used by Canadian and British soldiers who landed in Normandy on D-Day. They were assigned to airborne units and also provided to infantry or service units, allowing soldiers to travel greater distances while remaining silent and undetectable to the enemy.


Pictured: Costil’s daughter Marie-Claude Halot with the bicycle that was given to her father by a Canadian soldier who landed at Juno Beach in Normandy on D-Day.