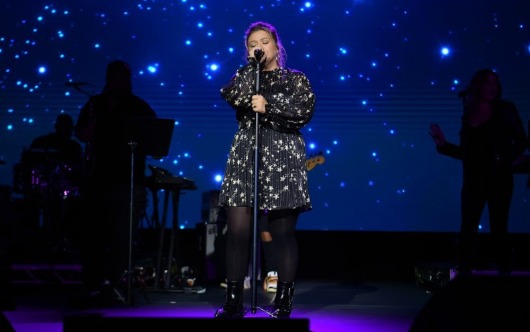 Norwegian Cruise Line (NCL) commemorated the debut of its all-new Norwegian Prima, and the brand’s first-ever voyage from Galveston, Texas, with an exclusive concert by GRAMMY Award-winning artist Kelly Clarkson.

The ship also served as the special venue for this year’s Norwegian’s Giving Joy awards ceremony, during which the Cruise Line and Clarkson recognized 100 teachers with a free cruise, and nearly $170,000 for the top three Grand Prize winners and their schools.

Norwegian’s Giving Joy is a month-long campaign which launched during National Teacher Appreciation Week (May 2 – 6, 2022) to recognize deserving educators for their unwavering commitment to bringing joy to the classroom.

To celebrate these incredible individuals, and their often-times undervalued profession, as well as to kick-off Norwegian Prima’s first voyage from the Lone Star State, Norwegian Cruise Line hosted a showstopping award celebration. Special guests included NCL President and CEO Harry Sommer; Norwegian Bliss Godfather Elvis Duran, American radio personality and host of “Elvis Duran and the Morning Show;” and superstar and godmother to Norwegian Encore, Kelly Clarkson, who delivered a stellar performance of her chart-topping hits including “Miss Independent,” “Stronger,” and “Since You’ve Been Gone.”

To conclude the Norwegian’s Giving Joy Award Ceremony, Sommer, unveiled the top three Grand Prize winners who received the most votes, awarding them with donations for their schools.

The Grand Prize winners are:

In addition to the expected donations to their schools, each of the Grand Prize winners received a big surprise – nearly $40,000 each in prize money thanks to Norwegian Cruise Line partners, who were moved by the ethos of Norwegian’s Giving Joy annual teacher recognition program, which shines a light on these inspiring individuals who play an integral role in shaping the lives of their students and our future.

In addition to winning a balcony stateroom during Norwegian Prima’s exclusive five-day roundtrip voyage from Galveston, Texas from Oct. 27 – 31, 2022, calling to Merida, Mexico, each winner walked away with an AMEX gift card sponsored by American Express, and one randomly selected winner was awarded with a trip to San Francisco with two VIP Adrenaline Lounge Passes to any one of the SailGP Season3 events taking place May 6-7, 2023, donated by Survitec Group.

The annual program is designed to highlight the connection between travel and education and to recognize teachers for their unwavering dedication to inspiring students every day. To date the program has awarded 230 teachers across the U.S. and Canada with free cruises and donated over $350,000 to schools and educators since 2019.

Following Norwegian Prima’s inaugural voyage from Galveston, Texas, it will sail an 11-day itinerary to the Caribbean with calls to Cozumel, Mexico; Oranjestad, Aruba; Kralendijk, Bonaire; Willemstad Curacao; Norwegian’s private island in the Bahamas, Great Stirrup Cay, before arriving to Miami for her debut in the “Cruise Capital of the World.” It will return to Galveston for a season of Caribbean voyages in the winter of 2023/2024.

Norwegian Cruise Line (NCL) and GRAMMY Award-winning artist and godmother of Norwegian Encore, Kelly Clarkson, hosted an exclusive concert on board Norwegian Prima to celebrate the ship’s debut in Texas, and to honor the 100 winners of Norwegian’s Giving Joy® campaign which recognizes teachers for the meaningful work they do every day.