Home › Pix of the Trade › ACV Pedals for Kids 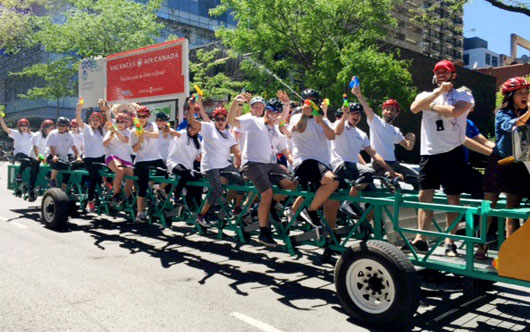 Air Canada Vacations recently participated in Pedal for Kids, a fundraiser in support of the Montreal Children’s Hospital. The team mounted a 30-seat bike and rode through the streets of downtown Montreal to attract attention to the cause. This is ACV’s sixth year participating. To date, the company has raised close to $130,000 – $21,500 was raised this year alone. Pedal for Kids is one of the most important fundraising events for the Montreal Children’s Hospital. The first ride on the big bike was in 1992. It was headed by Sylvie Lalumière and Michael Conway in memory of their daughter Meagan who received treatment at the hospital. The cause has raised more than $10 million. These funds have been used to conduct research, purchase medical equipment and provide development and training opportunities.