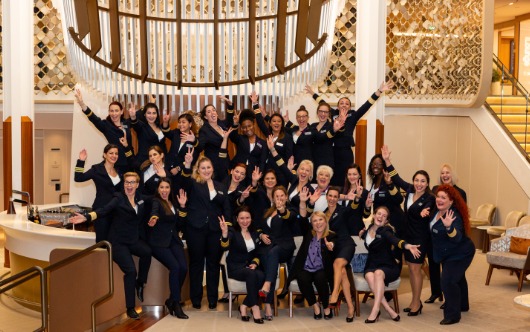 Celebrity Cruises made history on the weekend when for the first time in maritime history, an all-female bridge and onboard leadership team set sail, commemorating International Women’s Day.

Led by Captain Kate McCue, the first American female cruise ship captain, who was accompanied by 26 other women representing 16 different countries, the Celebrity Edge sailed out of Port Everglades March 8 and began a seven-day Caribbean journey. Retiring Pilot Boat Captain Cheryl Phipps, one of only a few female pilot boat captains in the US, led the ship out to sea.

Around the world, only 2% of the world’s mariners are women. Celebrity made it a priority to #BRIDGEthegap, leading the maritime industry into a more diverse future and growing the number of women on their bridge teams from 3% to nearly 25% over the last few years, ultimately, making this historic moment possible.