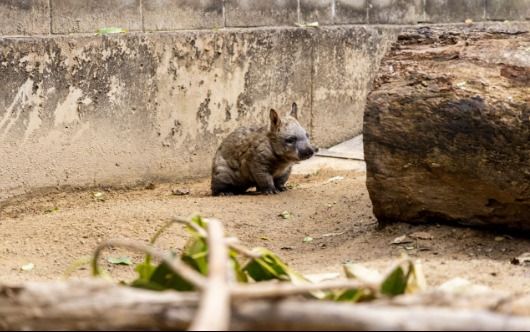 In some wonderful wombat news, Taronga Zoo Sydney is thrilled to announce the birth of a male Southern hairy-nosed wombat joey, a great success to Taronga’s wombat breeding program which has seen 10 joeys born since 2012. The little joey was born to experienced mum Jedda in December last year but has only just started to emerge from her mother’s pouch in recent weeks.

The joey has recently been identified as a little male and has been given the name ‘Wadu’ by his keepers which means ‘wombat’ in the Wirangu language of South Australia.

Senior Backyard to Bush Keeper Rebecca Russell-Cook said, “The name Wadu was given not only to acknowledge the native homeland of Southern Hairy-nosed wombat but it also a tribute to the last male joey that was born here at the Zoo, Waru, who holds a very special place in the heart of many of Taronga’s community”.

“Wadu, has followed in his older sister Winya’s footsteps and is already quite the confident and independent joey. He is too big for his mum’s pouch, now, but that doesn’t stop him from attempting to try to squeeze his way in now and then. We have witnessed some very impressive investigative and exploratory behaviours as he navigates his way on top of and around the numerous logs and branches in his habitat” says Russell-Cook.

“Jedda is quite an experienced mum, as this is now her third joey, however whenever Wadu does call out wanting to get her attention she is straight to his side, which is exactly the type of behaviour we want to be witnessing,” says Russell-Cook.

Guests visiting Taronga Zoo Sydney must ensure they pop down to Taronga’s Backyard to Bush to see if they can catch a glimpse of Wadu the wombat joey. Wadu is not the only new addition to Backyard to Bush, his emergence happens to coincide with the emergence of two adorable Red Kangaroos and the recent birth of five baby goats!

Taronga is proudly not-for-profit, so every dollar you spend supports the zoo’s vital conservation efforts and has the power to protect the world’s remarkable wildlife.