Home › Pix of the Trade › Back In Business 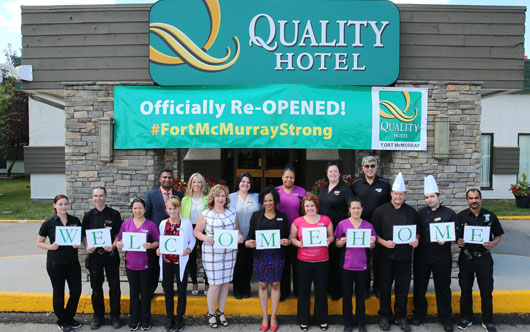 SilverBirch Hotels & Resorts reports the Quality Hotel and Conference Centre in Fort McMurray has re-opened to the public following the devastating wildfires that led to the evacuation of the city in May. While the hotel did not sustain fire damage, smoke from the wildfires required an extensive clean-up of the hotel and conference facilities. The hotel was also used to temporarily accommodate more than 200 first responders who were battling the wildfires. During the evacuation, SilverBirch’s Radisson Hotel Edmonton South, Double Tree by Hilton and Home2 Suites by Hilton West Edmonton accommodated Quality Hotel employees and their families as well as many displaced citizens of Fort McMurray. In addition, more than $61,000 was raised by SilverBirch through the Friends in Need campaign.