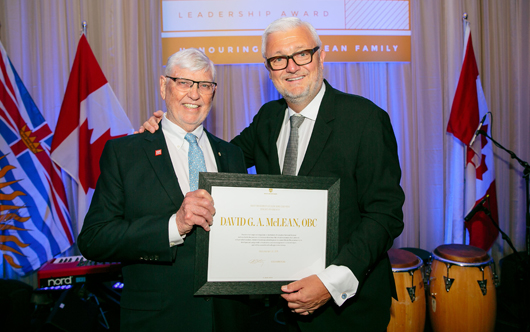 Rocky Mountaineer has dedicated one of its new bi-level GoldLeaf Service rail cars in honour of David G.A. McLean, recognizing his decades of service that shaped Canada’s rail industry. This marks the eighth rail car dedicated by Rocky Mountaineer since 1990 to acknowledge notable people and their contributions to the rail industry and the company’s success.

McLean is an entrepreneur, leader and philanthropist who has made a significant impact on the business landscape in British Columbia and Canada. He is the longest serving chair in the history of Canadian National Railway, having served from 1994 to 2014. During this time, he transformed CN into a leader and model for the railway industry with his innovation and entrepreneurial spirit. Upon his retirement from CN, he was named Chairman Emeritus of the rail company.