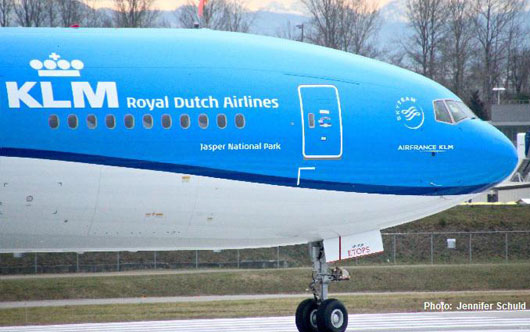 KLM Royal Dutch Airlines recently welcomed the 11th Boeing 777-300 to its fleet. The aircraft bearing registration PH-BVP now also displays Jasper National Park’s name on its fuselage as the airline traditionally names this fleet type with famous world heritage sites and nature reserve. Jasper National Park is the largest of Canada’s Rocky Mountain Parks with vast alpine meadows, glaciers and windswept ridges covering 11,228 square kilometres in all. “With the numerous natural reserves and parks in this country, we would need a 100-plus B 777 fleet to highlight all that Canada has to offer to travellers,” says Jean-Noel Rault, vice-president and general manager, Air France, KLM in Canada. “We are proud to be honouring Jasper National Park following the May 2015 opening of our fifth gateway in Canada – Edmonton.”