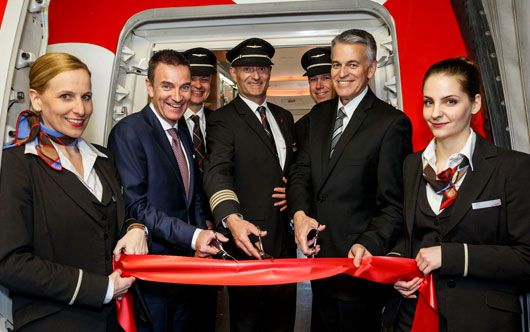 Patrick Oberson, who oversees SWISS Canada, and Pierre-Paul Pharand, vice-president, airport operations, infrastructure and air services development with Aéroports de Montréal, hosted a special send-off for the new SWISS Boeing 777-300ER departing Montreal for Zurich on March 29. With special guests and passengers waiting to board looking on, the ribbon cutting ceremony was done in keeping with the purest of Alpine traditions, included a performance by a Swiss alphorn player. SWISS says the cabin interior of the new flagship of the SWISS fleet has been “designed to surpass passenger expectations in terms of comfort and aesthetics in all three classes of service.” The aircraft’s latest generation engines will spawn considerable savings from the standpoint of fuel consumption, while reducing CO₂ emissions.