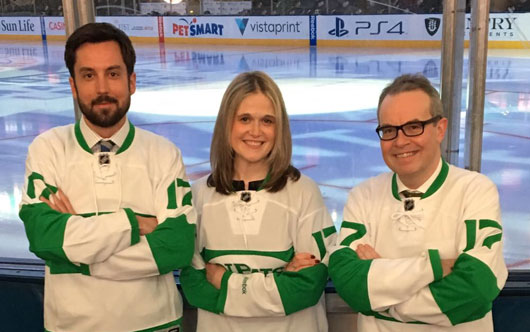 Originally called the Toronto Arenas and then the Toronto St Pat’s, the Toronto Maple Leafs’ roots are steeped in Irish history. The Toronto Arenas were purchased by the Toronto St. Patricks of the Ontario Hockey Association in 1919. The OHA St. Patricks were named in an effort to appeal to Torontonians of Irish decent. Flash forward to 2017 and the Irish still have strong ancestral ties to Toronto and Canada with 4.5 million Canadians claiming Irish heritage. In celebration, Minister of Financial Services, eGov and Procurement, Eoghan Murphy and Ambassador of Ireland to Canada, Jim Kelly, attended the March 18 Leafs game at the Air Canada Centre against the Chicago Blackhawks where they met with the president of the Toronto Maple Leafs, Brendan Shanahan, of Irish heritage himself. Murphy is in Canada as part of the “Promote Ireland” program around St Patrick’s Day – helping to grow tourism to Ireland. Pictured with Murphy and Kelly is Dana Welch, ‎manager, Canada, Tourism Ireland.