Music In The Air On The Costa Toscana 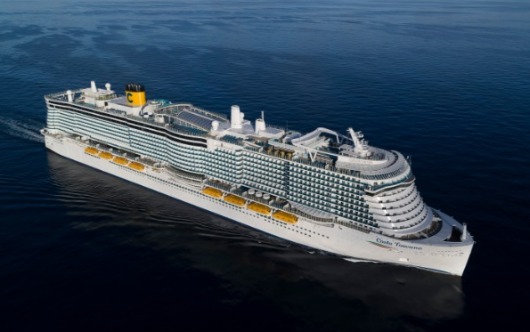 Costa Cruises and Rai Pubblicità are collaborating to bring the 72nd edition of the Sanremo Festival — the popular Italian song contest – to sea for the first time. The Costa Toscana, the new “green” ship of the Italian company’s fleet, will be the floating stage for the live shows of two stars of the past editions of the Festival: Orietta Berti and Fabio Rovazzi. They will be joined by exceptional Italian artists, who will perform every evening on the stage of one of the ship’s theaters.

Costa Toscana will be a constant and regular presence at the Sanremo Festival not only on television, on Rai Uno, but also on the radio. Indeed, the program “Tre per due” of Rai Radio Due, with the “Gemelli di Guidonia” singers, together with the band “Stefano Signoroni & the MC”, will be on board for the entire duration of the Festival.

Orietta Berti and Fabio Rovazzi will also be the stars of an entertaining web series, broadcasted on Costa’s social channels, which will recount their experience on the Costa Toscana at the Sanremo Festival and will allow the audience to discover the new ship.

The six episodes were conceived by Fabio Rovazzi himself together with Hello, Costa’s social media agency, and written by Matteo Grandi, with direction by Carlani and Dogana, and production by Don’t Movie.

Costa Toscana is moored at anchor about one kilometre from the port of Sanremo, where she arrived on Jan. 30 and will stay until Feb. 6.

On board, there will be no public presence, except for who will contribute to the events planned on board, in addition to the ship’s crew members. For the occasion, a special health protocol has also been developed and shared with the relevant health authorities.

Costa Cruises’ newest LNG-powered flagship, the 6,550 passenger Costa Toscana, which was delivered by the Meyer-Turku shipyard in Finland in December 2021, will serve as a stage at sea and provide accommodations for RAI TV staff and talent during the Sanremo Festival.