Home › Pix of the Trade › Silver Moon Christened In Athens 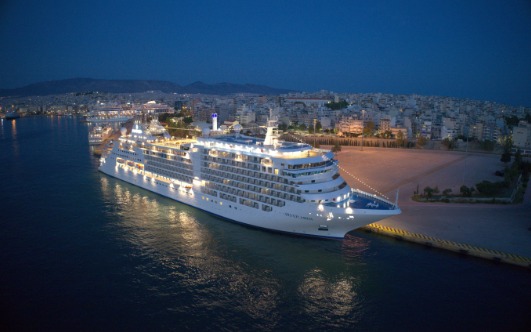 Silversea Cruises christened Silver Moon as the newest ship in its fleet as the cruise line builds momentum in its global return to service.

Becoming the first ultra-luxury cruise ship to set sail following the pandemic, Silver Moon embarked upon her inaugural season from Athens from June 18, undertaking a series of 10-day voyages in the Greek Isles.

At 40,700 gross tons and with a maximum capacity of 596 guests, Silver Moon is the cruise line’s second Muse-class ship in its fast-growing fleet.

Constructed by Fincantieri at its Ancona shipyard, Silver Moon is an evolution of her sister ship Silver Muse. The ship benefits from re-imagined public spaces, butler service in all suite categories, a nearly 1:1 crew-to-guest ratio, and Silversea’s hallmark small-ship intimacy.

For more, sail on over to https://www.silversea.com .