The Bahamas Has A Message For Canada 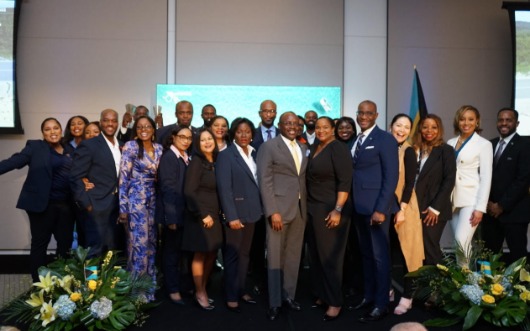 The Bahamas Ministry of Tourism, Investments & Aviation (BMOTIA) hosted a series of successful Global Sales and Marketing Missions in Canada recently that were designed to reengage tourism partners and boost visitor arrivals from the area.

Kicking off in Calgary at the city’s Fairmont Palliser Hotel, the high profile delegation brought a sampling of Bahamian culture and cuisine to Western Canada on Oct. 31.

Following the success of that event, the Honourable I. Chester Cooper, Deputy Prime Minister (DPM) and Minister of Tourism, Investments & Aviation led a delegation of senior tourism officials to participate in a trio of November events. The group hosted two events in Toronto (Nov. 1 and Nov. 2) before moving on to Montreal for an event at the Four Seasons Hotel on Nov. 3.

DPM Cooper, along with BMOTIA executives, destination representatives and hotel partners, hosted more than 500 guests at the evening events, with key industry leaders, sales and trade representatives, stakeholders and media in attendance. Guests were transported to The Bahamas via a full island-inspired meal, as well as Bahamian-themed cocktails, music and entertainment.  An electrifying Junkanoo performance ended the night with a bang.

“There is infinite potential in Canada – we consider the country an extremely important market,” said DPM Cooper.

He continued: “With new direct flights from Toronto and Montreal to Grand Bahama Island coming this December, and frequent flights from Toronto and Montreal to Nassau, visiting our beautiful islands is easier than ever. We are so pleased to also add in a weekly direct nonstop flight from Calgary to Nassau, as well as a weekly direct flight from Toronto to Exuma. Weekly service from Montreal to San Salvador on Air Canada will also be offered this winter (charter with Club Med). Canadians should keep island-hopping in The Bahamas top of mind for their next vacation.”

Meanwhile, Deputy Director General, Dr. R. Kenneth Romer, enthusiastically touted the new direct service to Grand Bahama as another clear indication of the island’s rebound and that Grand Bahama is open for business.

Said Romer: “I am elated to see up-close and personal all the possibilities available for Grand Bahama from Canada and look forward to how tourism at large will benefit from the invaluable connections and opportunities advanced from these global missions. I invite all of you to come to Grand Bahama and experience our diverse product offerings. Indeed, Grand Bahama is on a direct trajectory to being GRAND again.”

The series of Global Sales and Marketing Missions kicked off in September, beginning in the U.S. The BMOTIA will also be heading to Atlanta, Georgia, Houston, Texas and Los Angeles, California, in the future.

Once the Missions to the major travel hubs across the U.S. and Canada have been wrapped up, the BMOTIA delegation will visit Latin America and Europe to bring a taste of The Bahamas directly to key international markets across the globe to inspire travel to the destination.