Home › Pix of the Trade › The Bahamas’ Last Kerosene Keeper 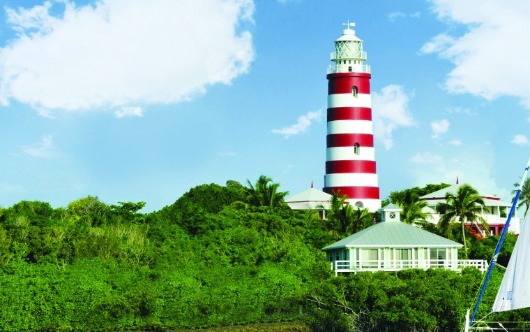 One of the most enduring legends in the pages of history is the mythical eternal flame that can never be extinguished by earthly means.

The truth of this phenomenon has remained lost in the past … until now.

In the Bahamas, an almost-eternal fire has been burning and guiding ships for nearly 200 years.

The story of this venerable flame begins in 1861, when the secluded and sleepy island of Hope Town, Abaco in The Bahamas got its first candy-striped lighthouse. Built by The British Imperial Lighthouse Service to mark the Elbow Reef, this lighthouse stands 89 feet tall.

At the time, the inhabitants of Hope Town opposed the project, as they saw it as a threat to their salvaging and wrecking trade.

After much opposition and debate, the Elbow Reef Lighthouse became fully operational in 1863, two years after it was built.

It has stood vigil ever since, serving as a beacon that reminds its visitors of a bygone era, continuously manned and kerosene-fueled for almost two centuries.

The locals undertake extraordinary efforts to secure replacement parts for the kerosene-burning apparatus of the lighthouse, most of which are no longer manufactured.

This kerosene light is kept burning day and night by its principal keeper Jeffrey Forbes Junior.

Forbes is a second-generation lightkeeper carrying on the tradition he learned from his father, Jeffrey Forbes Sr., a Bahamian lightkeeper for 37 years.

Forbes and the Elbow Reef Lighthouse Society work to preserve this very special lighthouse, while maintaining its charm and unique significance for future generations.

For all Hope Townees, the lighthouse signifies their living history. They feel safe knowing they have guidance in the dark and feel comfort seeing its red and white stripes stand out against the blue sky. An image of this iconic lighthouse is featured on the Bahamian $10 bill. Together with the village’s neat rows of gingerbread cottages painted varying pastel shades, it gives this settlement plenty of charm.

The light station is open to the public, Monday to Saturday, 9 a.m.-5 p.m.

To learn more about this iconic structure and things to know while planning a visit, go to www.elbowreeflighthousesociety.com.