Turkish Airlines Takes Off For The Kids 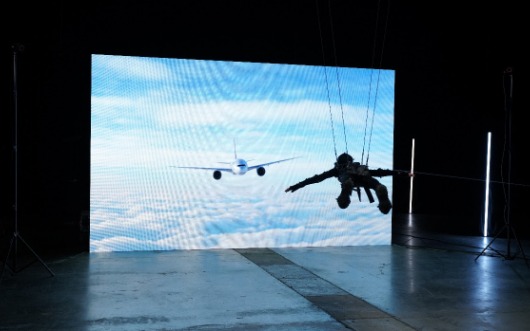 As a follow-up to drawing the world’s largest flag in the skies last year on April 23, National Sovereignty and Children’s Day, this year Turkish Airlines conducted a special flight, using motion capture technology to control an aircraft from the ground.

Turkish Airlines was the first airline to use motion capture technology for a communications project, releasing a film featuring children wearing special motion capture suits in control of the aircraft.

The data captured from children doing roll, pitch and yaw maneuvers by infrared cameras in a specially equipped hangar was then relayed to the pilots of the aircraft, effectively giving control to the seven children aged between seven and 10.

With Captains Serpil Köstepen, Cihangir Kılıç and the “Kid Captain” at the helm, the flight was based on motion data captured by infrared cameras.

The film was shot with cameras working at the same light spectrum with the infrared cameras used for motion capturing.

M. Ilker Aycı, Chairman of the Board and the Executive Committee of Turkish Airlines said: “April 23rd, National Sovereignty and Children’s Day, a gift from Turkey’s founder Ghazi Mustafa Kemal Atatürk to the children of the world, reflects the importance Turkey places on children. To commemorate this special day, we handed over the controls of this special flight to our children. As the national flag carrier of this nation, we will continue to introduce cutting edge technology into aviation and deploy latest innovations in our products and services.”

The film begins with the sequence of children doing the pre-flight checks of the aircraft in hangar, followed by the kid captain wearing the special suit that captures his motions and relays the data to the pilots in the air.

Following the maneuvers mimicking the moves made by the kid captain on the ground, the aircraft requests landing permission and ends with actual pilots meeting the children.

You can check out the video at https://www.youtube.com/watch?v=IWrX0b91xBc