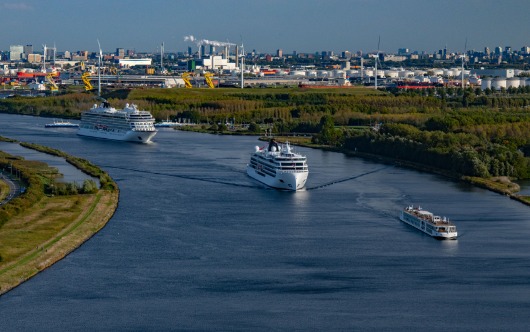 Viking celebrated its 25th anniversary in Amsterdam last week, commemorating the occasion by bringing together three classes of its ships – a river ship, ocean ship and its newest expedition ship, the Viking Polaris – to sail in a special convoy to IJmuiden, Netherlands.

During the Amsterdam event, Viking also named the Viking Polaris and her identical sister ship, the Viking Octantis, which is currently sailing her inaugural season in the Great Lakes. Both ships will spend the Austral summer in Antarctica, before traveling north to the Great Lakes for a series of voyages during spring and summer.

Torstein Hagen, Chairman of Viking, said: “Today is historic for Viking—to celebrate our 25th anniversary, to have all classes of our ships sailing together for the first time, and to name our phenomenal new expedition vessels. We are very grateful to their godmothers, Liv Arnesen and Ann Bancroft, for honouring us. As renowned explorers who became the first women to ski across Antarctica, they are the perfect choice for ships that are designed for expeditions. I am very proud of what we have accomplished in our first 25 years. And in our view, we are just getting started. Where do we go next? Onwards.”

Renowned explorers and educators Liv Arnesen and Ann Bancroft, the respective ceremonial godmothers of the Viking Octantis and the Viking Polaris, were in attendance in Amsterdam and offered a blessing of good fortune and safe sailing for the new ships—with Arnesen offering her blessing remotely via video to the Viking Octantis in the Great Lakes.

In keeping with the naming tradition, Arnesen and Bancroft assisted in breaking a bottle of Norwegian aquavit on each of the ship’s hull. During the ceremony, guests enjoyed performances from Sissel Kyrkjebø, one of the world’s leading crossover sopranos and godmother of the Viking Jupiter, and violinist Tor Jaran Apold.

Guests on all three Viking ships in Amsterdam were able to join in the naming ceremony, as well as witness the historic convoy, from their ships’ respective outdoor viewing areas.

Viking’s 25th anniversary celebration in Amsterdam is the most recent event during a milestone year in which the company has also welcomed to its fleet eight new Viking Longships on the rivers of Europe and new purpose-built vessels on the Mekong, Nile and Mississippi rivers.

By the end of 2022, two new, identical ocean ships will have also joined Viking’s fleet.

Go to www.viking.com for more.