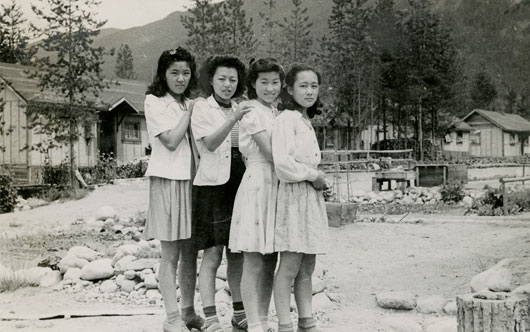 The Canadian War Museum has acquired a photo album created by Michiko “Midge” Ayukawa (née Ishii) when she was a teenager. She and her Japanese-Canadian family were treated as enemy aliens and forcibly relocated during the Second World War. More than 100 candid snapshots record her life at the Lemon Creek internment camp in the Slocan Valley, BC, as well as before and after the war. “These rare photos add to our collection of visual material documenting the experiences of Japanese Canadians during the Second World War,” said Stephen Quick, director general of the Canadian War Museum. “The stories they tell about day-to-day life at Lemon Creek contribute enormously to our understanding of how people coped with forced relocation, confinement, the confiscation of property, racism and other mistreatment during and after the war.”
(photo credit, George Metcalf Archival Collection, Canadian War Museum)